We writers—whether we’re building an argument or documenting a procedure or creating a lookup table—must give up the fantasy of easy acceptance if we want to avoid the Presumption Trap. We must suspend the illusion of like-mindedness, of oneness with our readers. We must detach ourselves and acknowledge that readers see what we write in their own ways. We can presume only one thing about readers: that we can’t presume anything.

This morning, The Content Wrangler Scott Abel chatted with me in a recorded webinar.  See it here: “Language Matters: How to Write Powerful Sentences & Paragraphs.”

A definition is where you say what something means. Or is it?

Is where. What an unuseful, unsatisfying phrase. I’m talking about definitions like these:

If you wanted to understand gravy trains, retweets, and horticulture, these half-clarifications would leave you wondering what types of things these things are. Surely a gravy train has nothing to do with gravy or trains, does it? What exactly is a retweet before it gets forwarded? If horticulture is where people grow plants, does that make it a plot of ground? You might reread the definitions, suspecting that you missed something. You might feel vaguely cheated, left behind with the most basic of questions unanswered.

Is where. What a great big abandoner.

END_OF_DOCUMENT_TOKEN_TO_BE_REPLACED

Are you reading this on a Droid? On an iPhone? On some other diminutive device being introduced even as I write this? Knowing that you could be gives me pause. The smartphone has become a primary reading device.[1] So, unless you write nothing but lost-cat posters destined for telephone poles, or other print pieces that no one will ever upload to the Web, you have little choice but to join me in grappling with this question: what must writers do differently to accommodate the small screen?

The answer, I believe, is … nothing.

Quick! What kind of word is from?

Bet you said, “Ha! Must be a trap. Better not say preposition.”

We all learned it in grade school: from is a preposition. When I sat down to draft this post, I never intended to overturn this teaching. I set out to write a brief notice that, yes, sentences can end with prepositions. I ended up unlearning some “facts”—laboriously, by way of confusion and resistance—and expanding my perspective. I came to see that prepositions are not necessarily prepositions, that easy labels—who knew?—can obscure deeper truths.

END_OF_DOCUMENT_TOKEN_TO_BE_REPLACED

If the editor-in-chief at Houghton Mifflin had had his way in 1959, Julia Child’s best-selling Mastering the Art of French Cooking — possibly the most influential work in American cookbook history — would never have been published. Even after Julia spent over a year tightening her manuscript at the editor’s request, condensing it as far as she felt she could, he still rejected it, judging it “so huge, expensive, and elaborate that it was certain to seem formidable ‘to the American housewife.'” *

This editor thought he knew his audience. He was wrong.

Julia knew her audience. She changed publishers. In 1961, Alfred A. Knopf served up this monumental pièce de résistance — all 734 pages — to the cooking world. That world, like Knopf’s, has never been the same… Continue reading → 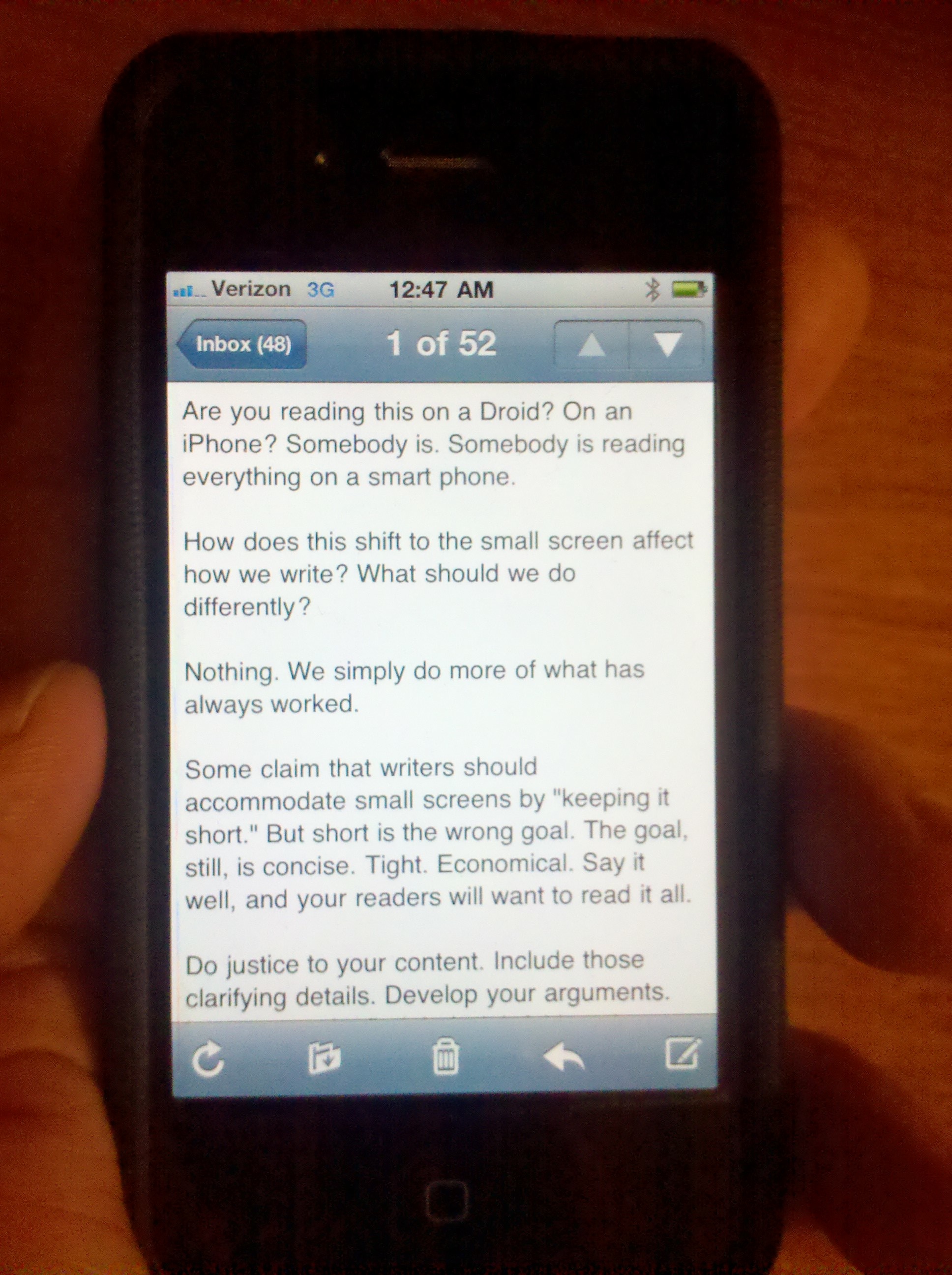 Are you reading this on a Droid? On an iPhone? Somebody is. Somebody is reading everything on a smartphone.

How does this shift to the small screen affect how we write? What should we do differently?

Nothing. We simply do more of what has always worked.

Sure, we have to adapt page formatting and image sizes and load times for handheld devices. If you’ve ever struggled to read a full-size web page by pinching and pushing it around on a 2×3-inch screen — and if you’ve also experienced the ease of reading the same information when it’s formatted for that screen (thanks to a mobile version of the site or to a reformatting app like Wikipanion) — you know what I mean.

Some claim that writers should accommodate small screens by “keeping it short.” But short is the wrong goal. The goal, still, is concise. Tight. Economical. Say it well, and your readers will want to read it all.

Do justice to your content. Include those clarifying details. Develop your arguments. Let paragraphs find their rightful lengths. Don’t stop short just because the screen does.

But do cut every word you can. Be more ruthless than ever. Do the extra edit. Review your words on a smartphone. Then edit again. As screens shrink, every word must work harder to keep its little piece of real estate. Make each one count.

r y cld jst dlt ll th vwls. (Or you could just delete all the vowels.)

P.S. Are you hip to smartphones and tablets and other “external prosthetic devices”?* See my guest post on the larger topic of mobile technology and its effects on the way people (including, notably, marketeers) do just about everything. In that post —  Marketing pros: Time to think small – I describe what I heard and saw at a seminar called “The Art of Pop Tech Marketing: 2011 Mobile Technology.”

*The phrase “external prosthetic device” comes from Amber Case, who was one of the presenters at the seminar. Know any people whose machines have melded with their bodies?

Was it a confusing icon? Was it a term used on different screens to mean different things? Was it a layout that could have been more logical? I don’t remember what I was pointing out to the product manager in charge of this device-in-development, but his reply seared itself onto my psyche. He might as well have said “Customers be damned.”

What he said (did he shrug?) was this: “People will get used to it.”

Maybe he thought the fix would have cost too much or would have delayed delivery. Business decisions involve trade-offs. I get that. What burned — a company’s brand is called a brand for a reason — was the unmistakable couldn’t-care-less attitude toward the user experience.

Some writers have a similar attitude toward their readers. The attitude sounds like “They’ll know what I mean” or “They’ll figure it out.”

True. They will. They’ll also figure out that the writer figured they would.

Whom. You can’t say the word without sounding snooty. As soon as your lips close on the uncool m, your nose tilts up.

Imagine a group of rockers walking out on stage, announcing themselves as (watch their noses) The Whom. Visualize Dr. Seuss sitting at his typewriter, writing about (again the nose) the Whoms in Whomville. Picture Abbott and Costello standing at their microphones, doing Whom’s on First.

Sure, these examples are grammatically ludicrous. The point is that whom, the word itself — regardless of correctness or incorrectness — offends some people’s sensibilities.

“Who’s she calling offended?” I can practically hear people whispering. It’s as if the word whom is somehow impolite. Presumptuous. Un-American. Dropping the m has become a form of cultural sensitivity, an expression of democratic values, a way of saying, “We’re in this together.” If you and I were created equal, common usage seems to say, why shouldn’t who and whom be equal too?

But who and whom are no more interchangeable than you and I. Ignoring this truth, which is apparently not self-evident, doesn’t make it less true.

How do you know which term is correct? More to the point for the whom-averse, when is it safe to use who?

Here’s a trick. In the split second before you say who, think he. If he works, who works. But if your he needs the m in him, then your who — there’s nothing for it — needs an m too.

Think of it this way:

With practice, your brain flies through these steps. You simply know.

Who cares? Often no one. Take Twitter. How many tweeters do you suppose complain about the phrase “Who to Follow” in their menu bar? This gaffe probably bothers only a teeny fraction of… the millions of people who use this site every day.

Hold on. A fraction of millions. That could be a lot of bothered people.

No one says that you have to use the m word. If you don’t want to, don’t. George Thorogood would never have hit the charts with a song called Whom Do You Love. But think before you use who as a substitute. Some people still know the difference. Who knows when one of them will be listening?

For another take on this trick, see Grammar Girl’s Who Versus Whom.