“The greatest difficulty, aside from knowing truly what you really felt, rather than what you were supposed to feel” is “to put down what really happened in action; what the actual things were which produced the emotion that you experienced. The real thing, the sequence of motion and fact which made the emotion … would be as valid in a year or in ten years or, with luck and if you stated it purely enough, always.”
—Hemingway, Death in the Afternoon

I’m never sorry when I take this bit of Hemingway’s writing advice to heart. For example, here’s a write-up that I spent hours whittling away at, saying less with each round of edits. Each time, I felt that I had cut as much as I could. Each time, with a little help from my mercilessly insightful husband, I realized that I had more to cut. Until this version. I think.

“Sir, I need to see your ticket,” the bus driver says.

A young man, maybe in his early twenties, is walking toward the back of the bus, where I’m sitting.

I wait for him to complete his thought or turn around. He keeps walking. Everything he wears and everything he carries, as far as I can tell, is black. His clothes—jeans, shirt, jacket with lots of pockets—all hang loosely, hiding his body. He drops into a seat across the aisle, one row behind me.

The turn signal is going tink-tink. The bus pulls into the flow of traffic. At the next stop, the driver calls back: “Your ticket, sir?”

The man speaks quietly, as if he’s talking in his sleep. He moves a slow hand around in his satchel. After a few seconds, he abandons the effort. Maybe he’s drunk or stoned, but I don’t smell anything. His face gives away nothing. One booted foot sticks out into the aisle.

“Need a couple of bucks for a ticket?” I ask.

He raises his face and looks at me.

I pull two folded ones from my wallet and put them in his hand.

“This should be enough.”

He stands and takes a step toward the front. The bus slows, pulls over, stops. And out the back doors he slips. 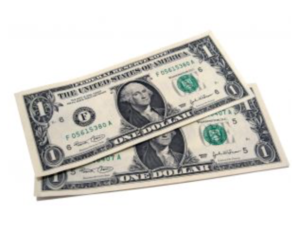 For an early draft of this piece, as requested in a comment below, see “Enough”—An Early Draft.